Royal jelly, or milky-white “bee milk,” has long been known for its mysterious growth effects on future queen honey bees, while also hailed by some as an anti-aging, cholesterol-lowering super supplement. But how this “queen magic” actually happens, and its potential benefit to humans, has remained a mystery to scientists.

Tapping into a fresh source from neighboring beehives at Yale’s West Campus, researchers at the Yale Cancer Biology Institute are now exploring how royal jelly might affect cell signaling and growth in cancer cells. 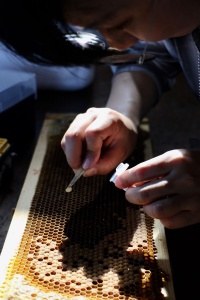 “The exact structure of the key protein in royal jelly remains unknown. But it is expected to act through the epidermal growth factor (or EGF) receptor – the main pathway targeted by cancer therapeutics today,” explained Daryl Klein, Assistant Professor of Pharmacology at Yale School of Medicine.

Klein’s lab studies cell signaling, and how these signals can be “tuned” in different ways.

Previous studies of royal jelly have isolated the dominant protein thought to be responsible for the rapid growth spurt in honey bee larvae, while other experiments in fruit flies and round worms have noted a wide range of characteristics including anatomical and physiological differences, longevity and reproductive capacity.

Using commercial jelly shipped from China, initial studies from Klein’s lab have started to resolve the oligomer structure of MRJP-1 (major royal jelly protein 1). However, the scientists found that resolution stalled around 11 Angstroms – not enough to reveal the potential secrets hidden in the jelly.

They fear that the commercially available product may have been the limiting factor.

“We’ve bought commercial royal jelly, but it goes through a lot of handling – freezing, thawing, and re-freezing - before it gets to us, which could affect the ultimate resolution we can see this protein and how we can do functional tests on it,” said Tongqing Li, Post-doctoral Associate in the Klein Lab.

Going directly to the source at West Campus could provide the best possible solution.

Partnering with Claire Saint-Amour (YC ’21,) Yale Landscape Lab Student Beekeeping Manager, the pair set to removing a brood frame from the hives on West Campus – adorned in beekeeping suites and wielding a smoker to calm the honey bees – before taking turns with pipettes to extract royal jelly from each honeycomb cell. 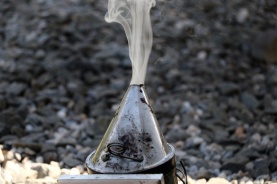 With a good harvest packed safely in iced test tubes, the next step is to subject the samples to the West Campus Krios Cryo-Electron Microscope to provide a near-atomic resolution view of what the protein complex looks like.

“We want to make sure we have the best starting protein to give us the best resolution. Hopefully, by extracting royal jelly right here on campus, we’ll have a pure fresh sample, and can find out how it modifies cell growth across different species, and how it might modify cancer cell signaling,” said Klein.

Perhaps the real magic of the royal jelly is how it is bringing together disparate groups at Yale’s West Campus - colleagues from the Pharmacology Department, the Yale Cancer Biology Institute, the Yale Landscape Lab, and the CryoEM core facility – in a project that begins to resemble a Yale time portal.

“Modern beehives like the ones we’re harvesting from were designed by Yale graduate Reverend Lorenzo Langstroth (Yale, class of 1831.) When we walk the royal jelly the quarter mile from the Langstroth beehive to Yale’s cutting edge CryoEM microscope it’s like leaping through 190 years,” concluded Justin Freiberg, Director of the Yale Landscape Lab.