New research at Yale has revealed major differences in aggressive types of breast cancer, and the potential for smarter treatments for patients.

Triple-negative breast cancer, which has a low survival rate and a lack of helpful molecular biomarkers — specific proteins that signal the presence of disease — is among the most aggressive breast cancer subtypes.

Published in the August issue of Cancer Research, discoveries at Yale provide new insights into the behavior of this type of breast cancer, revealing the molecular pathway of a single key protein and identifying a means of targeting it for therapy. 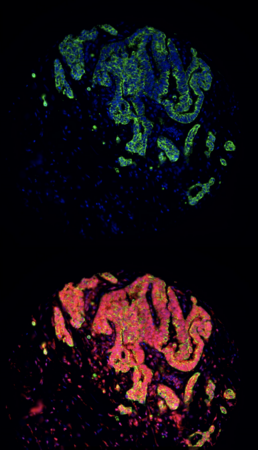 knowledge of cancer cell biology from the lab and testing it through mouse models and patient samples to predict a new therapeutic strategy matched to individual patients.

In partnership with David Rimm, a professor in the Department of Pathology, the team first analyzed archived patient samples to develop a marker — a specific antibody that recognizes the modified form of the protein target pyruvate kinase M2 (PKM2) in a tumor cell environment.

“By mapping the presence of modified PKM2, we found that it acts as a signal for aggressive disease in certain types of breast cancer,” said Maria Apostolidi, a postdoctoral associate in the Rinehart Lab and first author of the study. “We were then able to associate the amount and location of the protein within the cell to the severity of the disease and the potential outcome.”

In making an antibody to label modified PKM2, the scientists effectively identified a ‘signature’ biomarker for triple-negative breast cancer, and with it the opportunity to take the important next step: testing new therapeutic strategies in a living system.

“Our experiments showed that this particular biomarker was overactive in this type of cancer cell,” explained Rinehart, a faculty member at Yale’s Systems Biology Institute. “And when you identify a good target pathway, you can find ways to selectively turn it off and kill the cancer cell.”

With support from the Lion Heart Foundation and the Yale Cancer Center, the research team worked with Viswanathan Muthusamy at the Yale Center for Precision Cancer Modeling to test the cancer targeting strategies in mice with human breast cancer. The scientists repurposed two different drugs — one that ‘turned off’ the pathway activating the biomarker, and a second that bound to the protein itself.

They found that the treatment strategy in mice reduced tumor growth and reduced the biomarker, as predicted. Further experimentation in triple negative breast cancer cells showed that the drug combination could reduce the survival of cancer cells and at the same time their potential to invade.

“We’re grateful to all our partners in this work,” continued Rinehart. “The potential for future trials to test this combination therapy is cause for optimism that we are getting closer to actual drugs that help people tackle aggressive breast cancer.”

In addition to the Lion Heart program, the research was supported by Cancer Systems Biology at Yale, a program funded by the National Cancer Institute CA209992.