Yale Postdoctoral Associate Chrystal Starbird has received an inaugural Rising Black Scientist Award, it has been announced. Her selection from a pool of over 300 scientists by Cell Press editors and an academic advisory board recognizes an exceptional scientist and inspirational advocate for scholars of color.

Starbird is a structural biology postdoc in the Yale Cancer Biology Institute (YCBI) at the Yale School of Medicine and is Co-chair of the Yale Black Postdoctoral Association. Her research seeks to understand how formation of macromolecular assemblies defines cellular signaling, and how these can be targeted therapeutically in cancer. 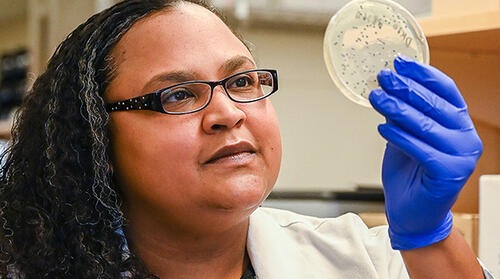 Presented by Cell Press and Cell Signaling Technology, the Rising Black Scientists Award recognizes one undergraduate student and one graduate student or postdoctoral scholar. The award supports talented and motivated young Black scientists on their journey.

“I am delighted that Chrystal has been formally recognized for her commitment to science and to others. She has an extraordinary drive to succeed, and everything needed to fulfill her promise”, said Kathryn Ferguson, Associate Professor of Pharmacology, and head of the YCBI lab of which Starbird is a member.

In laboratories country-wide, postdoctoral scholars are regarded as the lifeblood of academic research, working ceaselessly through a defined career stage characterized most of all by scientific productivity.

This year, while some scientists have been able to carry on with their lives and careers, the coronavirus pandemic has left many junior scholars stranded from their labs and struggling with family obligations, financial strain and a tenuous job market – the consequences of which have yet to be fully realized.

Though starkly aware of these challenges, Starbird is known for an infectiously positive outlook and for facing problems head on.

“You should know what the odds are when you go into a career, know what the realities are, but above all prepare to succeed,” she says of her time at Yale.

“That’s the way I view things. That’s the attitude I’ve taken in my life.”

“Because I’m so positive, people often don’t realize that I’m a pragmatist,” she continues. “Luckily, I’ve had a lot of successes, and I think a positive attitude has really helped along the way, even when success seemed quite unlikely.”

Nonetheless, having to balance everything during the pandemic has been one of the biggest challenges of her life.

As a first-generation scholar, Starbird is no stranger to challenges. Growing up in hard times and in an unstable family environment, problems were commonplace - “everything was a learning curve,” she says.

“I became a problem solver,” is her practical response. “And this is exactly as it should be for an aspiring scientist! I took the view that there’s a solution to every problem. Yes, there are going to be some misses, but I’m going to figure out a solution.”

Now at Yale, Starbird is clear about the benefits at her disposal, and is determined to improve them for others.

Yale is an amazing environment for research with tremendous resources, she says, not just financial or material, but the people. “I’m meeting and talking with some of the world’s best scientists and thinkers, the most creative, enthusiastic people!”

Succeeding in academic is never easy. Despite playing a vital role in the research endeavor the short-lived nature of a postdoc sometimes seems at odds with working to build and improve life on campus.

“The reality is that we are full citizens of Yale,” insists Starbird. Although conditions and policies are a constant work in progress, she and her postdoc peers are all key parts of a thriving research community.

With widespread protests across the globe last year and an increase in public awareness about systemic racism, a groundswell of initiatives and momentum is helping build a more diverse academic system. Whether taking an active role in this work or advocating for parents on campus during COVID, Starbird sees a definite forward trajectory.

“Speaking as a scholar of color, sometimes the biggest changes might not be so tangible that we can point to them on paper. But they are happening here as more people come together in conversations about structural racism and how they interact with scholars of color.”

Real change is, she notes, already being felt as a result of efforts to increase awareness and cultural sensitivity.

From initiatives at the university’s West Campus, which is opening lab access to area school children, to the experience of this year’s Intersections Science Fellows Symposium – attracting scholars of color from over 25 schools across numerous institutions – systemic efforts to diversify the “pipeline” are starting to click as more Black scholars enter the highest levels of academia.

That’s good news that is going to benefit Yale and make it a better place, says Starbird.

This year’s inaugural recipient of the Rising Black Scientist Award recognizes that her fellow postdocs, and scholars of color in particular, are dealing with many complicated issues that have recently been brought into painful focus.

“For some of us this year has been particularly hard, but I want to think about what is possible instead of just talking about what needs to be fixed.”

“Hopefully we all think of ourselves in this way – always aspiring to be better. No one could argue that Yale isn’t an exceptional place, but we can surely be even more excellent. I can be positive because the people I interact with are positive.”

“We should acknowledge hard realities, but I’m always forward focused.”

As this year’s postdoctoral awardee, Chrystal Starbird’s winning essay will appear in the February 2021 Issue of Cell. Her recent contributions in Nature are accessible here

More information about the Yale Black Postdoctoral Association can be found here.

By Jon Atherton, with images by Courtney Smith