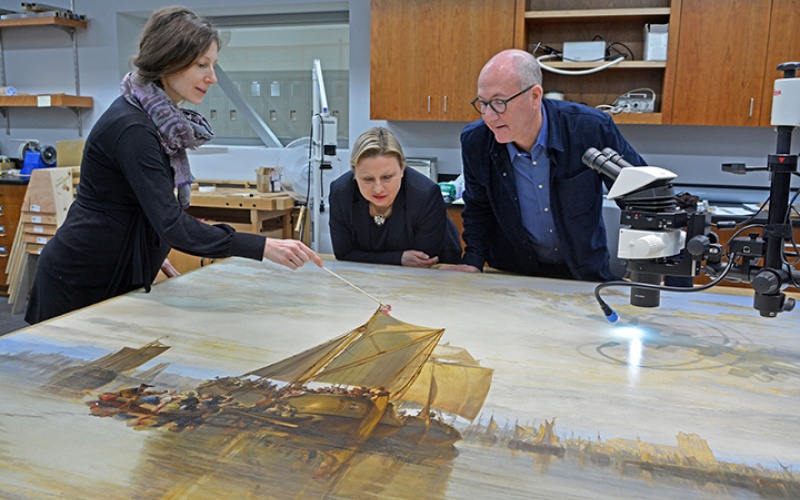 Chances are that visitors learn something new every time they enter a museum, gallery, or library. For many, firsthand encounters with Yale’s collections are an integral part of shared learning across the university, the local community, and beyond. But chances are equally good that visitors are less familiar with how behind-the-scenes processes shape the exhibition experience by forging international connections that span science, culture, and history. Technology, analysis, and treatment methods are used collaboratively by curators, conservators, and scientists to enhance understanding of the collections, bringing works to their original condition and preserving them into the future.

The work of the celebrated British artist Joseph Mallord William Turner and his seminal painting Dort or Dordrecht: The Dort packet-boat from Rotterdam becalmed is a current case in point. One of the great masterpieces of the Yale Center for British Art, the painting is currently undergoing study in the Conservation Laboratory of Yale’s Institute for the Preservation of Cultural Heritage (IPCH), a new connecting point for art conservation, basic and applied science, and educational opportunity at Yale’s West Campus. Prior to its return to the Center’s newly conserved building, Dort is receiving a closer look by the Yale scientists Anikó Bezur and Erin Mysak of the IPCH Technical Studies Lab, and Mark Aronson, Chief Conservator at the Center. “The facility (IPCH) allows for smoother logistics, and enables a closer relationship between the team, lab, and painting,” explained Aronson.

“All of the instrumentation is immediately available without having to continuously move equipment to different locations.”

A forthcoming exhibition being organized by Gillian Forrester, the Center’s Senior Curator of Prints and Drawings, and a Turner expert, which will investigate Dort’s execution, critical reception, and its relationship with artistic politics of the period, provided the impetus for this project. The painting created a sensation when it was first exhibited at the annual summer Royal Academy exhibition in 1818, astounding observers with its remarkable luminosity and brilliant coloration. These dazzling effects prompted the Yale team to undertake further analysis of Turner’s radical techniques and choice of materials.

Prior to beginning a thorough physical analysis of the painting, the team visited London to view paintings and sketches by Turner at the National Gallery and Tate Britain, the latter of which houses most of the works that he bequeathed to the British nation. The research team, which also included Tate Britain’s Joyce Townsend, Senior Conservation Scientist, and Rebecca Hellen, Paintings Conservator; Ashok Roy, the National Gallery’s Director of Collections; and Ian Warrell, a former Tate Britain curator, spent three intensive days scrutinizing Turner’s work, bringing together an exceptional knowledge of the artist’s idiosyncratic techniques, palette, and choice of canvas to understand more fully the Center’s landmark painting.

Turner’s creation of Dort was a direct response to the Maas at Dordrecht (National Gallery of Art, Washington, DC, Andrew W. Mellon Collection), the masterpiece by the seventeenth-century Dutch painter Aelbert Cuyp, which was exhibited to wide acclaim in London at the British Institution in 1815. Turner was inspired to paint Dort after he visited Dordrecht, Cuyp’s birthplace, in 1817 during a trip to Belgium, Germany, and the Netherlands after the end of the Napoleonic Wars. He conceived Dort as part of a dialogue with a painting by his contemporary and friend Augustus Wall Callcott, the Entrance to the Pool of London (Bowood Settlement, United Kingdom), which was also inspired by Cuyp’s work and shown at the Royal Academy in 1816. “Turner’s painting was a dialogue both with an old master and a contemporary artist that was respectful but with a competitive edge”, Forrester said. In 2018, the two-hundredth anniversary of the first public display of Dort, Forrester’s exhibition at the Center will show the Maas at Dordrecht and Dort together for the very first time, along with related works from Tate Britain and other collections. The exhibition will also showcase the findings of the IPCH team, demonstrating the rich potential for advancing art-historical knowledge that collaboration between curators and scientists offers.

Back in Connecticut, the story of Turner’s Dort continues to unfold under the immersive analysis of Bezur and Mysak at the IPCH Technical Studies Lab. One of several projects to benefit from the unique conditions at the Institute, their analytical goals will home further in on Turner’s use of chromium-based colorants, such as chrome yellow (lead chromate), a bright yellow pigment that is first noted in period literature on painting materials just a few years before Turner painted Dort. Identified as a new metal by the chemist Nicolas Louis Vauquelin in 1797, chromium was detected in crocoite, a deep orange mineral. Vauquelin noted the potential of lead chromate as a pigment and experimented with its production under different conditions to yield a variety of yellow hues. Turner’s documented use of chrome yellow by 1814 confirms he was an early adopter of this pigment, which may have given life to the spectacular atmospheric shimmering effects that admirers associate with his painting. For Mysak, the opportunity to learn more about the material composition of Dort is revealing further understanding of Turner’s artistic process. “Our analysis of paint materials will tell us more about what new pigments and modified binding medium Turner incorporated into this work, and provide important clues about how we can best understand and protect this important piece,” she said.

Dort is considered to be one of Turner’s best-preserved works, allowing the conservation team to focus on their analysis, rather than the task of conserving the artwork, before it returns to public display at the Center in May. Thanks to Yale’s collaborative partnerships, the opportunity for others to be dazzled by Turner’s painting in years to come need not be left to chance.