These interviews set out to shine light on the community of undergraduate students at Yale’s West campus. Nearly all Yale undergraduate STEM majors participate in research with faculty, and West Campus is home to many such students STEM careers from Yale and outside institutions. Today we meet Joseph Bennett in the Energy Scien 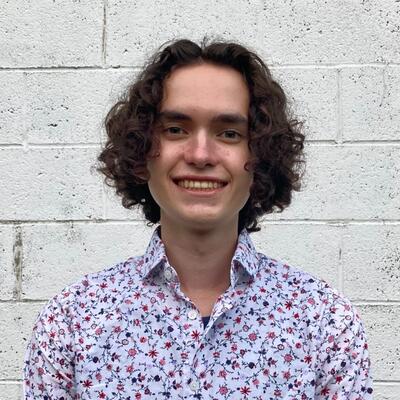 Joseph is a rising third year at Yale College, where he is pursuing a double major in chemistry and history. He shared some of his experiences working in Dr. Peijun Guo’s lab at the Yale Energy Sciences Institute, one of seven institutes at the West Campus. The lab performs optical studies on materials for applications in energy conversion, optoelectronics, and information science.

“I started with a general interest in chemistry in high school,” explains Joseph, “and in college I took my first few chemistry classes and enjoyed them enough to continue with the major.” Within chemistry, he explored energy sciences as a focus in his undergraduate research. “Along with others of my generation, I have anxiety and hopes for changes in the world’s energy systems,” Joseph says.

His interest in energy sciences was further sparked by his general chemistry professor James Mayer, who described energy sources as one of the greatest challenges of our generation.

Looking to take things further, Joseph reached out to professors asking to join their labs and found Dr. Peijun Guo to be thoughtful and responsive. On joining the lab, he found a close-knit group of researchers. “We are always checking in on each other’s projects,” he said.  “And our group enjoys spending lunch together on the Terrace at West Campus.”

Currently, Joseph is working on a project where he synthesizes unique lead halide perovskite crystals that have applications in increasing the efficiency of solar cells. It takes about 1-3 days for his crystals to form and for measurements to be taken.

“It’s really validating to feel like I’m practicing chemistry, rather than just learning it in classes. Now I understand what doing research looks like in practice,” says Joseph. As his first research experience, the Energy Sciences Institute has provided a nurturing environment, with many different groups sharing the same space.

“It’s been easy to access many different mentors who come together around their common interest in energy science,” he continues. “Dr. Guo encourages a collaborative community.”

Joseph has a clear message to prospective undergraduate researchers: “Here at West Campus, you will find professors who are responsive to your questions, proposals and requests to meet.”

Outside the lab, Joseph is a Co-Coordinator for First-Years in Support of New Haven, a group that facilitates sustainable and thoughtful relationships with the city and its communities. He also enjoys frequent visits to New York and bonding with his housemates through cooking. Since most of his housemates are vegan and vegetarian, Joseph has learned many new recipes and has gotten better at cooking crispy tofu.

Joseph was speaking to Dani Flores, Yale ‘25, who is participating in a summer communications internship at Yale’s West Campus through the New Haven Promise Program.