Mandar Deepak Muzumdar has received an Innovation Award from the Damon Runyon Cancer Research Foundation. Muzumdar is an Assistant Professor of Genetics and of Medicine (Medical Oncology) at the Yale Cancer Biology Institute and a member of the Yale Cancer Center. 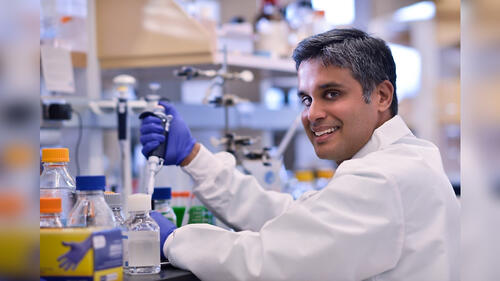 He is one of five scientists to have been named 2021 recipients of the award, which supports early career scientists whose projects have the potential to significantly impact the prevention, diagnosis, and treatment of cancer.

Despite innovations in combination chemotherapy, targeted therapies, and immunotherapies, most advanced cancers remain incurable. Based at Yale’s West Campus, the Muzumdar Lab seeks to decipher the mechanisms that govern the initiation, progression, and maintenance of cancer.

Leveraging a combination of sophisticated genetically-engineered cell and animal models, the Lab seeks to define the molecular basis for the tumor cell and host adaptations that drive cancer progression.

The funded project focuses on understanding how hormones produced in the pancreas itself promote pancreatic cancer development in the context of obesity. Findings from this work may enable targeting these hormonal drivers as a novel approach for pancreatic cancer prevention and treatment.

Muzumdar graduated from Harvard College and received a Doctorate of Medicine from the Stanford University School of Medicine. He completed a postdoctoral research fellowship at the Koch Institute for Integrative Cancer Research at the Massachusetts Institute of Technology before joining the Yale faculty in 2017.

The Damon Runyon-Rachleff Innovation Award funds cancer research by exceptionally creative thinkers with “high-risk/high-reward” ideas. The awardees are selected through a highly competitive and rigorous process by a scientific committee comprised of leading cancer researchers who are innovators themselves. Only those scientists with a clear vision and passion for curing cancer are selected to receive the prestigious award.