Getting to Know: Stephen Luzietti

Getting to Know is our blog series in which we interview West Campus staff members. This week’s guest is Stephen Luzietti, who many of us know as the go-to-guy for research support services on West Campus. Steve recently marked his 25-year anniversary at Yale, spanning positions in the Chemistry Department as well as at the West Campus.

What’s the best thing that’s happened to you so far this week?

I’m really used to being behind the scenes, but I recently reached 25 years at Yale, a milestone that I’m happy to pause and recognize. I started at Yale in 1996 as a casual employee in the Chemistry Department. Back then I was performing odd jobs and minor renovations of PI offices alongside the in-house plumber, Dan Webster and carpenter, Ed Ginter. Eventually, a position opened up in the Chemistry Stockroom and I was there for around 10 years, providing support for our researchers. Back then, orders were placed manually by staff, not individuals. It wasn’t unusual for me to spend most of my afternoons on the phone ordering lab supplies and replenishing inventory. Now we have SciQuest and the process is much more efficient for everyone!

I met a lot of good people in Chemistry. That is where I first met Chris Incarvito [Associate Provost for Science Initiatives]. We became teammates on the Chemistry Intramural Softball team, where I got to know other researchers, some of whom I know to this day. I relocated to West Campus in 2013 to coordinate research support services, working closely with Administration, Facilities and EHS colleagues, and supervising our glass wash staff. Our work has changed so much over time. Today I look after a number of different programs: glass wash, backup -80 freezer storage, and our SmartVue remote temperature monitoring system. We also created a ‘freezer farm’ for the research complex for storage of biological and chemical reagents. The infrastructure was developed to provide our scientists storage of legacy research materials to free up space in lab freezers.

Where is your favorite place in the world?

I’m not really a ‘be here and be there’ vacation guy. I’m happiest relaxing with family and friends on a lake around a fire pit. There is something special about Disney though - the hustle and bustle of the place. The atmosphere and the music are intoxicating. Seeing the joy on my son’s face makes it all worth it. It’s the magic kingdom, of course! 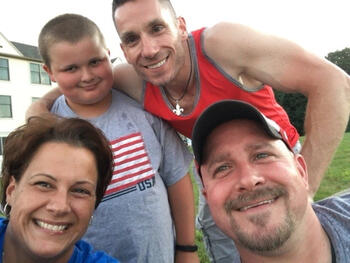 I was born and raised in the area. I grew up in East Haven and have lived in West Haven for around 17 years. My commute to West Campus is around 2 minutes, depending on school buses! There’s a local tavern in West Haven called Dive Bar. One day, when our favorite place (Captain’s Catch) was closed, we came across this place. Their burgers are excellent [Steve’s menu tip is ‘The Hangover’ just because “it’s a great burger.”]

Where is the best place you’ve traveled to and why?

Our honeymoon in the Dominican Republic is hard to top. The weather, the beaches…it was the most relaxing place on earth for us. Although the three-hour drive along dirt roads to our hotel wasn’t kind to my wife, once there the resort was beautiful. On the way back to the airport, we arranged to take a helicopter – like one of those old ones with the glass bubble – and we got to see the whole island from the air.

What would you do (for a career) if you weren’t doing this?

When I was a kid, I wanted to go into law enforcement. I was a big movie fan and saw myself in the FBI! I have this other idea where I’m a sort of film critic, maybe vlogging on YouTube about films, but also pairing food and a beverage of choice [Ed: we discuss an example where Steve reviews Jaws while eating seafood, washed down with a Landshark beer.]

We’re providing some remote temperature monitors and cold storage units to Yale Health’s COVID vaccine program. It’s good to leverage some of our research infrastructure to help with the vaccination effort.

Your favorite line from a movie?

Braveheart is my favorite movie of all time. The speech by William Wallace [Mel Gibson] at the famous battle scene is a good one. But I like this one from Ferris Bueller: “Life moves pretty fast. If you don’t stop and look around once in a while, you could miss it.” It’s important to enjoy life and not worry too much about what’s around the next corner.

What hot tip would you share with someone new to Yale?

One of the biggest things I’ve learned is the importance of communication. Whether you have the answer or not, it’s important to be responsive and helpful to people. We’re here to help our researchers. It’s a partnership that works when we talk to each other. It’s made 25 years go by quickly!

Sally’s is hands down the best pizza in New Haven.