Yale graduate student Karl Barber has been named among the inaugural class of Schmidt Science Fellows. The unique post-doctoral program aims to provide the next generation of leaders and innovators with the tools and opportunities to drive world-changing advances across the sciences and society.

The program, conducted in partnership with the Rhodes Trust, home of the prestigious Rhodes Scholarships, places 14 fellows in a new research environment immediately following the completion of their PhD studies in order to encourage an interdisciplinary scientific mindset. 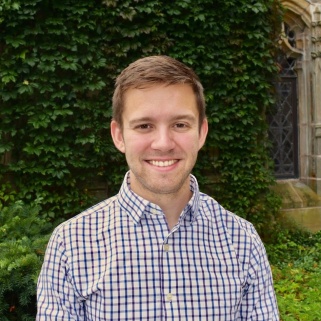 Barber, a member of Yale’s Systems Biology Institute and Ph.D. student in Cellular and Molecular Physiology, drew upon his experience in chemical engineering and biology - and his own personal experiences as a grad student - to win one of the most demanding and sought after scientific fellowships.

“I am humbled to receive the Schmidt award and emboldened to embark on a new career path,” said Barber, who met with “a veritable who’s who of the scientific community” as part of the highly competitive selection process. “Meeting Eric and Wendy Schmidt in person and dining with Sir Martin Rees, the Astronomer Royal, left me star struck. It was an incredibly surreal experience!”

Barber was on course to switch his career focus when the opportunity to apply for the Schmidt Fellowship came along.

“I currently work in the field of synthetic biology, but the Rinehart lab is unique because it sits at the interface with physiology. We use synthetic biology to answer questions that are relevant to human disease,” explained Barber, who receives a year of funding for post-doctoral studies aligned to translational research projects.

“Yale has opened every door for me. Many things have happened that I never could have dreamed of. Working with Jesse Rinehart was a dream come true and I already feel nostalgic about my time at Yale.”

Personal experiences at graduate school also shaped Barber’s career. “My close friend died of a rare form of liver cancer two years ago and her legacy has been a huge inspiration for my future research,” noted Barber. “I’ve tried to convert my grief into a positive narrative. She has been the inspiration for a lot of my science and the questions in cancer biology and immunobiology that I want to address going forward. That work now feels much more achievable, thanks to the Schmidt Science Fellowship.”

By working in prestigious research labs outside of their existing area of expertise, each Schmidt Fellow will be exposed to new science and technology, novel ways of thinking, and a broader network of colleagues who can help guide their success as leaders. The selected Fellows, whose areas of study span the natural sciences, engineering, mathematics, and computer sciences, will also each receive a stipend of $100,000 as part of the program.

“I am so excited for Karl and what he’s achieved in four years,” said Barber’s Ph.D. mentor, Jesse Rinehart, an Associate Professor of Cellular and Molecular Physiology at Yale. “He is someone who makes exciting science happen, who people gravitate to for ideas and energy. With support across Yale, the School of Medicine, and the West Campus, he has thrived and proved himself through peer reviewed publications and high impact science.”

“I applaud Eric and Wendy Schmidt, and the Rhodes Trust, for this bold, innovative, and premier scholarship award. Their Fellowship plants a flag in the ground for scholars with the X factor – future leaders who can make a real difference in modern science.”

Former Alphabet executive chairman Eric Schmidt and his wife Wendy Schmidt have given hundreds of millions of dollars in support of diverse causes across the globe.

The first members of the Schmidt Science Fellows program were announced at the Alexandria Center for Life Science in New York City on Monday, April 23. The post-doctoral fellowship, funded by the Schmidts in partnership with the Rhodes Trust — home of the prestigious Rhodes Scholarships at the University of Oxford - officially launched in October 2017.

A total of 6 women and 8 men were selected, spanning 9 nationalities and 12 different universities.