It is with sadness that we mourn the passing of Charles (Charlie) Schmuttenmaer, Professor of Chemistry, faculty member of the Energy Sciences Institute, and beloved friend and colleague to many at Yale’s West Campus. 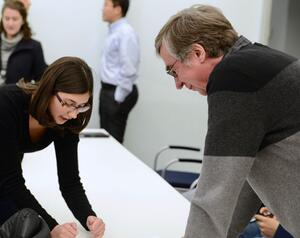 Professor Schmuttenmaer was a pioneer in the development and applications of terahertz (THz) spectroscopy. His lab explores novel applications of time-resolved THz spectroscopy (TRTS) and THz time-domain spectroscopy (THz-TDS). In particular, the group exploit the unique features of TRTS to characterize the efficiency of electron injection in dye-sensitized photoelectrochemical cells, as well as transient photoconductivity in semiconductors, quantum dots, nanoparticles, and nanotubes.

Alongside fellow chemists Gary Brudvig, Robert Crabtree, and Victor Batista, Schmuttenmaer made up the Yale Solar Group, a collaboration dedicated to mimicking the natural process of photosynthesis in the lab to transform sunlight into useable transportation fuel.

“We will sorely miss Charlie in our Solar Group,” said Brudvig. “We’ve been meeting as a group every week for the past 15 years and Charlie rarely missed a meeting. His pioneering work to use THz spectroscopy to measure photoconductivity was key to our studies of interfacial charge injection on metal oxide nanoparticles,” he said.

“Charlie was never shy about asking questions that made us think hard about our science,” continued Brudvig, who directs the Energy Sciences Institute at West Campus. “He often livened up the group meetings with videos, such as “How to Make a Solar Cell from Donuts and Tea” and “Who Killed the Electric Car?”

Schmuttenmaer taught the graduate course Molecules and Radiation II and remained committed to regular remote meetings with his students through the 2020 pandemic. A recent Yale Daily News article described the Professor of Chemistry as an “ordinary guy,” grounded and supportive of his students.

Nearly “any topic” could be discussed in his research group - from politics (“go vote!”), to graduate student life, and always a consistent focus on science. His openness led a recent group member to enroll at Yale over other graduate schools.

“His views on how science should be done meant that we were encouraged to pursue our own ideas and projects,” explained his students. “He always had his group’s back.”

A constant presence to his research group, Schmuttenmaer was equally engaged in meetings and gatherings in support of the West Campus community.

“I remember how welcoming he was, and the genuine interest he showed in my work,” recalled Chris Incarvito, Associate Provost for Science Initiatives, of being welcomed by Schmuttenmaer to the chemistry department in 2002.

“Charlie’s commitment to the development of Yale’s scientific community stretched far beyond lab. His outgoing personality made it naturally easy for him to engage others as a mentor, colleague, constructive critic, and friend simultaneously.”