When Yale’s West Campus stepped up as one of Yale New Haven Hospital’s COVID19 vaccination clinics a host of campus units quickly clicked into gear to deliver the best experience for the public with the minimum of disruption to the active campus.

Since opening in January many thousands have visited Building 410 on West Campus to receive their vaccine, and the positive response from visitors has been overwhelming. To those driving by the impression is of a well-oiled machine, which is in no small part thanks to the West Campus security team and their work, rain or shine, to ensure a seamless flow of traffic and people. 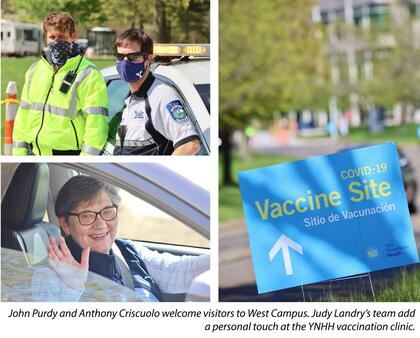 Officially assigned to assist in traffic control, pedestrian safety, and to direct medical staff, it’s the “personal touch” that each officer has brought that is making a real difference. “It’s the good morning cheer when patients have received their shots that means a lot to folks,” says Security Manager Judy Landry of the extra efforts of her team. During a stressful year, that positivity is going a long way.

Always aware of COVID19-related safety and the need for masks and social distance, even before the clinic opened the team were welcoming the public on numerous ‘recon trips’ to campus to investigate parking and building access. “Allowing people to drive in and go to the building reassured people, many of whom hadn’t ventured far from home since the shut down a year ago,” noted Judy.