Unpredictability the key to “rewiring” our fight against infection: In conversation with Professor John MacMicking 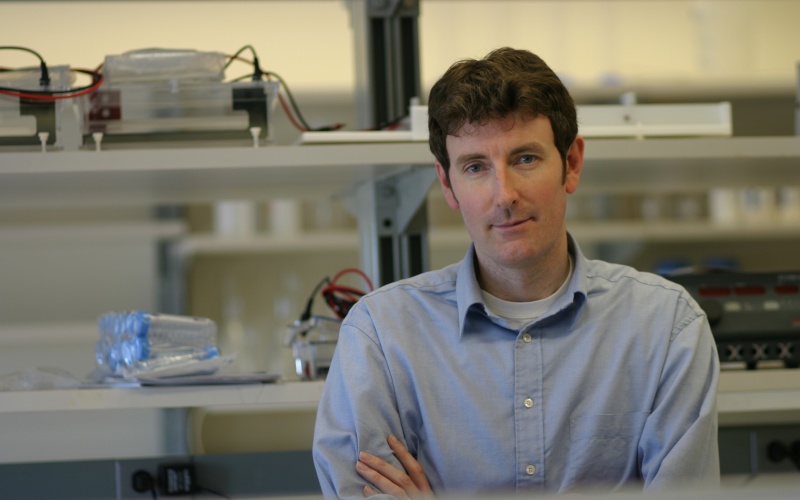 This fall Yale will mark the 10-year anniversary of the purchase of its West Campus. Transitioning from a former pharmaceutical facility to an academic community of some 1700 residents, the Campus has been redesigned to connect scholars across disciplines to bring new perspectives to today’s most pressing challenges in health, culture, energy and the environment.

In this series of highlights, we feature the work of faculty, students and staff, and ask about their experiences and what drew them to Yale’s West Campus.

Here, John MacMicking of the Systems Biology Institute talks about his work to integrate abstract and experimental science in an effort to “rewire” the host immune response to infection. Dr. MacMicking is an Investigator of the Howard Hughes Medical Institute (HHMI) and tenured Associate Professor of Microbial Pathogenesis and of Immunobiology at the School of Medicine.

Let’s start with your work. What do you do here?

“We’re trying to understand how cells defend themselves against infection and the underlying “circuits” or design principles responsible for this activity. Higher species such as humans have a dedicated immune system but many non-immune cells also participate in this process – resident cells of the brain, muscle, skin, and liver, for example, restrict viral, bacterial and parasitic infections when appropriately instructed to do so.

This “non-classical” immune system is greatly under appreciated, with the potential to revolutionize the way we think about fighting infections or other major problems such as cancer. Because many of these non-immune circuits are wired differently than those of the immune system, it’s critical to understand how such mechanisms operate in natura. This opens up the possibility of turning them on or off via small molecules or through the use of synthetic biology.

Rather than targeting specific microbial processes – which is the conventional wisdom in antibiotics - our work may provide a platform for “host-directed therapies” that harness natural defense strategies or even heighten those activities to improve on Mother Nature’s original design. If we can assemble a blueprint of how different cell types resist infection then we are in a position to manipulate their responses in a way that is potentially protective for the human host”

Why do this within the Systems Biology Institute?

“HHMI has a mandate to understand the natural world. That mantra fits well with the Systems Biology Institute in its attempts to understand large-scale phenomena as a more “complete” picture of biological behavior. A common behavior in response to infection is for mammalian cells to transcribe several thousand new genes involved in combating different pathogens. In essence, re-sculpting 15-20% of the coded genome. That of course doesn’t include non-coding RNAs and microproteins that also likely contribute to controlling infection. Of the well-annotated genetic material in the human genome, we know only a handful in terms of their antimicrobial activity. The rest remain a mystery.

“We need a network-based approach to delineate higher-order programming of human cells during infection. The days of going gene-by-gene are fine, but we need to interpret large-scale protein networks at a systems level to help us deal with the complexity, the hundreds of moving parts.

Only then can we describe hubs of activity where 20, 30 or even a 100 proteins may be working to restrict a given virus or bacteria or fungi, often in select locations buried deep within a subcellular landscape.

This requires integration of abstract and experimental scientific approaches – first deconstructing and then reconstructing how a cell orchestrates its component parts to prevent infection from continuing. Add to this high- or super-resolution imaging and you introduce a third or fourth dimension (if time is included) to predict subcellular and kinetic responses at a nanoscopic level.

Ultimately we’d like to rebuild virtual cells to mathematically model their behavior and the hundreds of proteins they contain to restrict infections from occurring. This can only happen once we have some first-order knowledge about the design principles of the cell in question, combining theory and computational programs to help elucidate integrated circuits capable of defending the host cell interior. This will help us unravel the logic of cell-autonomous immunity.

While we often study mammalian responses against infection, we’re mindful of what our eutherian ancestors and other metazoans can teach us.  In this respect colleagues like Gunter Wagner in SBI will be an invaluable source of information and insight. Others like Scott Strobel who are working with plants here at West Campus also provide a broader perspective, while Andre Levchenko’s deep knowledge of cytokine signaling and engineering microcircuits will likewise be extremely helpful. So there are lots of opportunities for fruitful collaborations with great colleagues across disciplines within the Systems Biology Institute itself and wider campus as a whole.

How can the campus help science to flourish?

Very simply, I wanted to talk to and interact with people outside of my field, to increase the collision rate with unfamiliar scientists.

The driving force in coming to SBI was to work alongside different colleagues – mathematicians, physicists, chemists, bioengineers; different domains that enable something unpredictable to occur in science.This works well in the ‘Institute” model by having diverse people in close proximity to each other. It encourages cross-disciplinary dialogue. And while this model is the framework, we have to complete the edifice by finding solutions to interesting and sometimes hard problems. In short, we need to work together in a committed and driven fashion.

West Campus has evolved to a point where this will become a practical reality. Our labs are engaging in conversations they wouldn’t normally have in an attempt to build a hybrid lexicon: a physical then a biological language. As biology becomes more quantitative, physics may in turn move back towards biology – much like Max Delbrück helped form the early “phage” group at Caltech and later Cold Spring Harbor in the 1940s that helped underpin the molecular biology revolution. Biology may be at a similar crossroads now as we seek more quantitative, physical solutions.

The key is to approach others from different fields to invite expertise and knowledge. We hope this will at least be transformative in our own studies to discover and understand new phenomena we wouldn’t otherwise be thinking about.”

What else brings an investigator to West Campus?

“Colleagues you respect and admire. A lack of departmental structure and the intellectual freedom associated with it. And the core facilities here – the Imaging Core, Genome Center and Krios microscope, among others – will enable us to do things we couldn’t do as well elsewhere. We’re already seeing these cores linking together. We can make nano-fabricated microfluidic circuits in the Cleanroom to take into the Imaging Core to see single cell structures, which may in turn take us around the corner to the Krios cryo-electron microscope to look for those structures at the semi-atomic level. There’s the potential for continuous integration among these technologies on campus to interrogate a problem, and it’s all done within walking distance.

The ability to do 21st Century biology at such close proximity is part of the incentive to come here, and fulfills the aspirations of the university to expand cutting-edge science at Yale.

It’s also an environment that we hope attracts colleagues from across Yale as well. The freedom to do the science we want to do here is really special, and the Campus has all the necessary ingredients to make it work. In a relatively short time there’s already a sense of anticipation in the air. The critical mass is here now. The right infrastructure is in place. Our business is to get on with the job. The ribbons have been cut. Now what we need is scientists talking to scientists, engaging in the kind of collegiality and mentorship to make sure discovery is the inexorable outcome.