It’s been a busy year for Genevieve Airyanne Antoine. A recent double major in chemistry and physics, the graduate of Tuskegee University, Alabama, visited Yale last summer alongside a growing network of scholars – her “squad” as she now knows them – to participate in the “Historically Black Colleges and Universities Summer Teacher`s Institute in Technical Art History (or HBCU STITAH).” 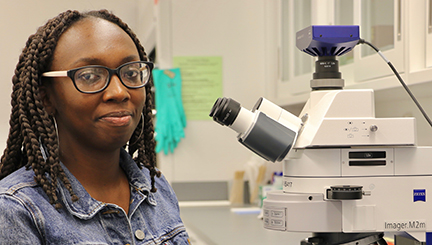 Developed by Antoine’s mentor Jontyle Robinson, curator of the Legacy Museum at Tuskegee and founder of the Alliance for HBCU Museums and Galleries, the program, a partnership between the Alliance and Yale’s Institute for the Preservation of Cultural Heritage (IPCH), aims to increase diversity in the predominantly white profession of art conservation.

Until recently the field had been something of an unknown to Antoine, who expected to pursue more traditional routes in the basic sciences; through medical school, to industry (agriculture and engineering being prominent at Tuskegee), or continued theoretical study.

“Being here last year was a real eye-opener for me,” she said of her time at Yale. “The field of art conservation and the prospect of working inside a museum wasn’t on the horizon. I really didn’t know what conservation was.”

Being part of the 2017 summer program helped the undergraduate to make connections not only with fellow students from across the country, but also with their mentors, and with a host of scholars from across Yale’s collections. “I’ve built a professional network where I’ve continued to seek opportunities within the art conservation field,” she continued, “and that led me back to Yale this summer.”

With the encouragement of Caryl McFarlane, a co-founder of the Alliance of HBCU Museums and Galleries, Antoine again turned to Ian McClure, Susan Morse Hilles Chief Conservator at Yale University Art Gallery, and his colleagues to arrange a return to Yale as the Institute’s first Postgraduate Associate, this time to work intensively on projects at the interface of art and science.

Guided by the collaborative team of Cynthia Schwarz, Assistant Conservator of Paintings at the Yale Art Gallery, and Anikó Bezur, Director of the IPCH Technical Studies Lab, Antoine engaged in an ongoing project to develop polymeric micropillars based on “nano-spatulas” found on the feet of geckos. The spatulas enable the lizards to make their trademark “sticky” steps – attributes that could help art conservators clean acrylic paintings in a non-destructive way.

Working closely with IPCH Conservation Scientist Pablo Londero, Antoine utilized microscopy and photography to help evaluate the structured polymers for their potential to clean the surface of paintings consistently.

“I’ve worked with other interns, art conservators, scientists - everyone has been so welcoming and willing to take time with advice and guidance,” concluded the Tuskegee graduate. Through the support of a year-long leadership program through Fisk Museum, and with a network opening up across the country, Antoine’s next step is an internship at the Georgia O’Keefe Museum, Sante Fe, New Mexico.