Next in our series highlighting undergraduate students at Yale’s West Campus we meet Hector Rivera in the Yale Cancer Biology Institute!

Hector is a recent graduate of Hamilton College, New York, where he majored in biology and French & Francophone Studies. This summer, he is a New Haven Promise intern at West Campus conducting research in the Lemmon Lab under the mentorship of graduate student Zaritza Petrova. 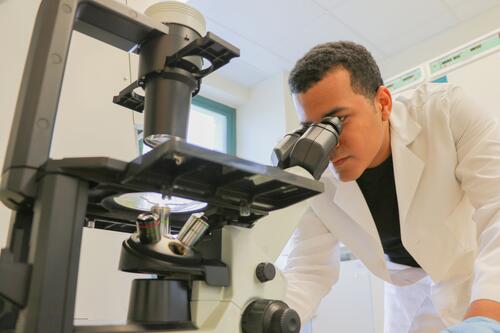 “I don’t feel the need to prove myself, or have big expectations weighing down on me,” Hector says of the welcoming environment of the Lab. The Lemmon Lab conducts research into understanding the signaling networks controlled by growth factors in cell surface receptors - called ‘receptor tyrosine kinase’ - that, when mutated, cause cancers and other diseases.

Hector has been studying mutations of the tyrosine kinase ‘epidermal growth factor receptor (EGFR)’, which plays a role in controlling cell division and survival but can lead to lung cancer when mutated. The lab seeks to understand how these mutations alter the normal behavior of EGFR and lead to lung cancer, ultimately having future applications in discovering new therapies for patients.

“We’re growing cell colonies that express our mutations of interest in order to observe the effects of these mutations on the behavior of the EGFR,” says Hector, who has been able to perform these experiments independently thanks to the support of his mentor. “We’ve run into some issues along the way, but the reality of this work is trial and error. Much of what I’ve been doing is troubleshooting ‘failures’ in our protocols and repeating different parts of our experiments.”

“If I ever need to, I can just walk up to a lab member and ask them a question or for advice,” says Hector of the culture of collaboration that he has grown used to in just a few weeks in the lab.

Resources and incredible mentors are readily on tap, and Hector has used his time to talk to colleagues about future career opportunities. Everyone has been willing to add ideas based on his individual interests and goals. “People ask me, what do you want to do after this internship? It’s still a question that I haven’t fully answered just yet,” explains Hector. He has been looking at careers in the medical field and is also exploring MD PhD programs.

With so many people eager to support him, Hector describes doing research in the lab as “challenging, but not daunting.” His advice to future interns? “Anyone with an interest in the sciences would be able to thrive in this environment!”

Hector was speaking to Dani Flores, Yale ‘25, who is participating in a summer internship in communications at Yale’s West Campus through the New Haven Promise Program.