Getting to Know: “Dr. Dave” Hiller

Getting to Know is our blog series where we find out what makes West Campus residents tick. This week’s guest is Dave Hiller, Research Scientist in the Strobel Lab at the Chemical Biology Institute. A West Campus resident since 2015, Dave obtained a PhD from the University of California - Santa Barbara in 2005. These days his roles span lab projects investigating regulatory RNA and fluoride biology and his interest in children’s science education.

So what’s the best thing that’s happened to you so far this week?

I made a scavenger hunt at home based on the stuff my kids did last month for school. They ran around the house fixing computer programs, decoding DNA messages, translating numbers from a foreign language, figuring out where they were in Google street view, etc. Sledding was fun too. We’ve found wearing face masks also helps keep us warm!

Where is your favorite place in the world?

Dolly Copp campground in the White Mountains, New Hampshire, is my happy place. I’ve been going there every year since I was born give or take a year or two. Even when my oldest son was born, we went camping when he was only a few months old. There was a Being Well at Yale program where you had to meditate to get points, so my strategy was to sit in my office and close my eyes and picture myself by the campfire at Dolly Copp. We hiked Mount Adams last year for our ten-year wedding anniversary, which was breathtaking.

Growing up there was a fried food shack called Kool Kone in Wareham Mass, close to where I grew up. It was just a really cool seafood place. We like Mikro in Hamden too, and their new venue is right on the Farmington Canal Bike Path, so we’ll go as a family and just ride right into their little patio.

Where is the best place you’ve traveled to and why?

I’d have to say Amsterdam, where I did research as a grad student for about a month. Being in a lab there was super fun. Then I took a ten-day bike tour in France. I flew into Geneva, put my bike together and took a train to Grenoble and did three days in the Alps, three days in Provence, and then to Paris. I only marginally spoke French so I was winging it quite a bit.

What would you do (for a career) if you weren’t doing this?

In addition to my ‘adult’ scientific career I’ve started to provide educational opportunities for young kids, particularly focusing on science and mathematics. I’ve participated in the Pathways to Science outreach efforts at West Campus, both through the annual Science Festival and recently the remote workshops, and did science fair mentoring in the New Haven schools. I got started when my own kids started preschool and I thought I should do some science with their class. Once I’d started I found I actually loved it. There was a great moment at the end of the first year, at preschool graduation, when every kid was asked their favorite activities – this one 5-year-old kid said “rockets with Dr. Dave.” Obviously at that point I was hooked! 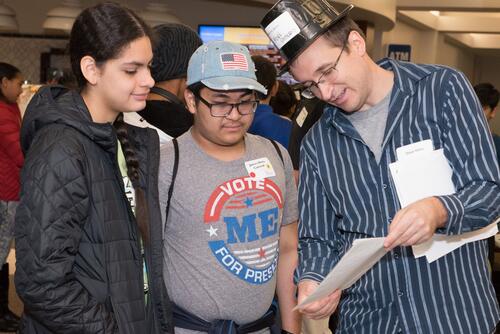 When my kids started at elementary school I began an afterschool math program, then started my own business, called Stempogo, with the idea of expanding to other schools. My long-term goal is to build an online presence so we can maximize science access to other kids.

I’m excited to run our science session for West Campus families on Presidents Day Weekend. I actually think calling me a scientist is a bit of misnomer – we’re all scientists really, and everyone applies science principles (“Babies do science” bellows Dave’s 7-year-old son from the next room.) He’s right! Babies drop food from their highchairs to test gravity – for all they know it’s going to float in the air, right? - and then there’s the psychological experiment testing their parents! The reason we’re a successful species is the ability to do science. Science is a method to figure out answers to present day questions. It can happen anywhere, not just the lab. In our coming session we’ll look at why the sky is blue, why a sunset is red, and why milk is white. The neat thing is that we won’t be using any fancy apparatus – mostly just household items that everyone has. Make it a scavenger hunt at home! Most kids are interested in science because they’re already interested in art, sports, music – we can just do science with those things.

Your favorite line from a movie?

My favorite movie is Forrest Gump, but for one-liners I’d go with the Big Lebowski. You can answer just about every question with a quote from that movie. (“That’s just your opinion man!”)

What hot tip would you share with someone new to Yale?

Yale is a sweet place to be. It’s different to anywhere I’ve been. To get to know a place my strategy is to sign up for a sports team, and I joined the BBS softball team when I arrived here. It had biology people from the Med school, Divinity School people, a physics professor, so many different types of people. Perhaps the culmination of this was at our wedding. We hired a reception venue but just asked our friends to do stuff! My PI made our wooden wedding rings, we had a great photographer in the lab who did all our photographs, and an undergrad colleague played cello - all these scientists doing all these other amazing things! At Yale everybody can find something to fit them.

“Dr. Dave” will lead kids of all ages - and curious adults - through an exploration of color and light at 10am, Monday, February 15. The interactive online session will feature hands-on activities at the intersection of science, nature, and art (just like West Campus!) West Campus families should contact jessica.criscuolo@yale.edu to register and for a supply list of the regular household items you’ll need for the session.

To nominate a colleague to be our next guest please drop a line to jon.atherton@yale.edu