Gene expression – the conversion of instructions in our DNA into proteins - is used by all known organisms to generate the basic cellular machinery for life.

Regulation of each step in this process determines what cells can do, with broad application to our health and how we respond to disease. 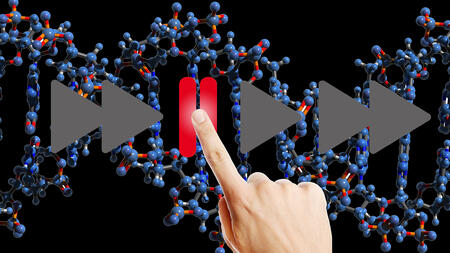 Researchers at Yale’s Institute of Biomolecular Design and Discovery have devised a new way to measure one of the early ‘pause points’ in the gene expression process, when enzymes ‘choose’ which genes are turned on and off. Their findings were published today in Molecular Cell.

To express a gene, an enzyme called RNA polymerase copies DNA into RNA, which transmits genetic code for protein creation. Though this can happen quickly, sometimes cells control whether or not the polymerase gets out of the starting gate in a process called ‘promoter-proximal pausing.’

“There’s a lot we don’t know about how our genes are read as part of the gene expression process, but we found that these enzymes often halt in their tracks for minutes at a time before deciding to either select or reject the gene to express,” said first author Josh Zimmer, a graduate student in the lab of Matthew Simon, associate professor in the Department of Molecular Biophysics & Biochemistry.

The team developed a method to capture how long the polymerase pause at the beginning of gene expression and combined their method with hormone treatments to show how the pause point is critical for gene expression. Their findings revealed pause-release rates to be highly variable but with a surprisingly ‘choosy’ 80% of RNA polymerase molecules prematurely terminating at this point.

The new method will help guide scientists to better understand the critical regulatory function of promoter-proximal pausing and its role in the cellular versatility and adaptability of many organisms.